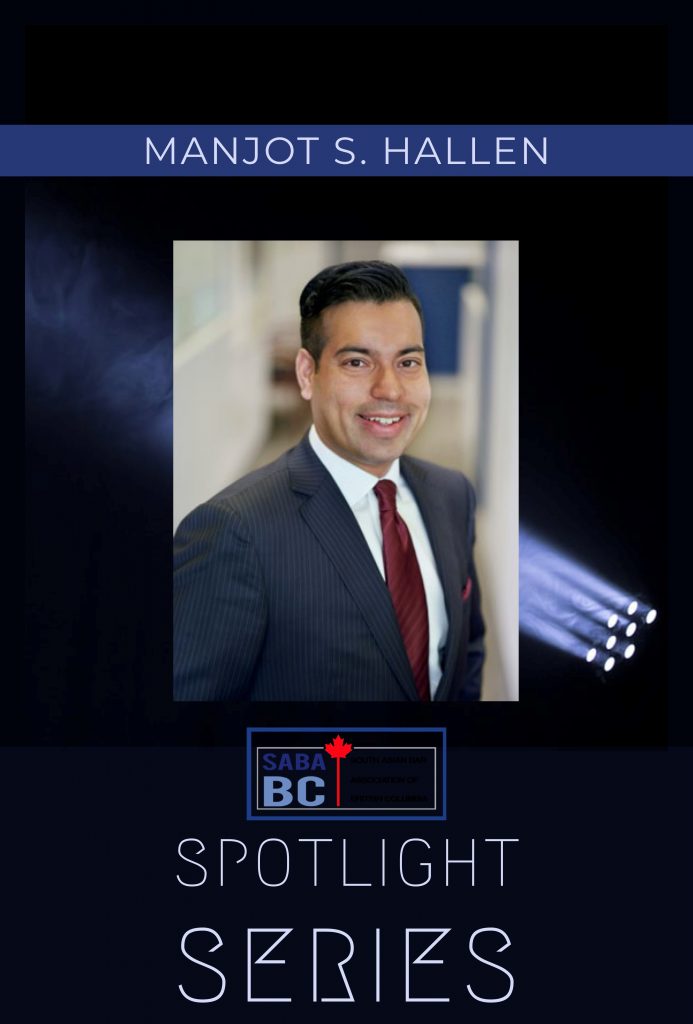 This month’s spotlight is on member Manjot S. Hallen.

Manjot obtained a B.Com from UBC and an LLB from Queen’s University. Manjot was called to the BC bar in 2005. He is currently a name partner at Warnett Hallen LLP where he practices primarily personal injury, civil litigation and election law. Manjot and the team at Warnett Hallen have successfully represented numerous catastrophic injury victims resulting in millions of dollars of compensation.

With thousands of cases to his credit,  Manjot Hallen brings a wealth of experience to every client assignment. A lawyer since 2005, Manjot is a member of the Canadian Bar Association, Trial Lawyers Association of British Columbia and the South Asian Bar Association (BC). Manjot has lectured on personal injury issues for the Trial Lawyers Association of BC and the Continuing Legal Education Society of BC. As a Governor of the TLABC, Manjot advocates for public policy that allows injury victims and their families to obtain fair compensation. Manjot is proud to have been a member of SABABC since 2004. He continues to advocate for diversity in the justice system and access to justice for the BIPOC and LGBTQ2 communities. Manjot is frequently asked to comment on legal and political issues.

Prior to practicing law, Manjot worked in government assisting several federal cabinet Ministers. He is a Past President of the Liberal Party of Canada (BC) and is the Honorary Consul for the Republic of Croatia in BC, Alberta, and the Yukon. Manjot is also the Chair for the BC Children’s Hospital A Night of Miracles Gala.